7500 Mynas down and still counting

To date trappers in the CVCIA Indian Myna program have trapped and euthanased over 7500 of the pest Indian Mynas. Help protect your much loved native birds from this serious threat. The program is still very active and welcomes any new trappers or others who want to be involved in co-ordination. We can be contacted via mynas@cvcia.org.au 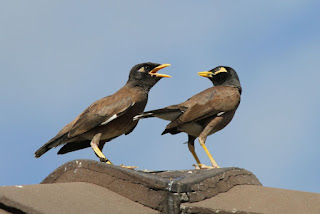 Laura and Kevin have just returned from Brisbane where they ran an education, trapping and trap building workshop for Bulimba Creek Catchment Coordinating Committee (known as B4C).
There was a mixed group of over 25 people present for the morning session where Laura talked about the Indian Myna problem why they are so bad, how to combat it and how trapping can assist to maintain the balance and allow our wonderful natives to survive.
After they enjoyed a healthy lunch Kevin then lead the remainder through an introduction to trap building focusing mainly on the trickier sections so that people could go away and build their own traps. This is the first time we have run a trap building session and although we saw ways to improve the session those that stayed appeared to learn and enjoy. We found it a rewarding trip and hopefully those who attended felt the same.
Posted by Indian Myna Project Officer at 9:28 PM

We have had lots of enquiries for our really well built PeeGee traps and although we charge only $25 for a trap the freight costs made then them too expensive for most trappers. So with lots of help from our trap builders we have come up with a modified version where the smaller trapping section fits inside the larger holding section thus halving the over all volume. Although the trap requires a bit of assembly this modification reduces the freight cost to around $30 for most NSW and southern Queensland.

The traps are supplied with detailed assembly instructions as well as how to trap hints and a small bag of our preferred bait (ie Lucky Dog Minis).

The pictures below show the trap as delivered and the result after a bit of assembly. For a copy of the assembly instruction please click
﻿﻿﻿﻿﻿﻿﻿﻿
﻿﻿﻿

It's been a rather slow 2014 winter period for trapping mynas possibly due to very low rainfall but we are still putting a dent in their numbers and helping maintain a balance for the betterment (is that a word?) for our native wildlife.  Tally is over 6,300  (Jan 2011 - Aug 2014).  Well done everybody.
Posted by Indian Myna Project Officer at 7:46 PM

Australia Day Celebration – One for our Native Birds

This Australia Day weekend Laura and I were able to-do our bit for the native hollow dwelling birds and mammals.
There were a few Indian Mynas about the property last week but we had been unable to lure them to our trap near the house even with our caller. So Friday night we set another trap (without a caller) in the area where we had seen some of them on the ground.
Saturday morning a flock of Mynas descended on the trap and soon we had several in the trap. By nightfall after the remaining un-trapped Mynas had left the area, we went to check the results, 16 birds trapped!  We had seen more, using binoculars, around the trap earlier, so we set a second trap.
This time we put two callers in each trap and on Sunday another 14 ventured in making a total of 30 birds in 2 days. One trap is still out but either we got them all or they have moved on for now.
There have never been this many birds here before. These two days tally is more than our previous three years. 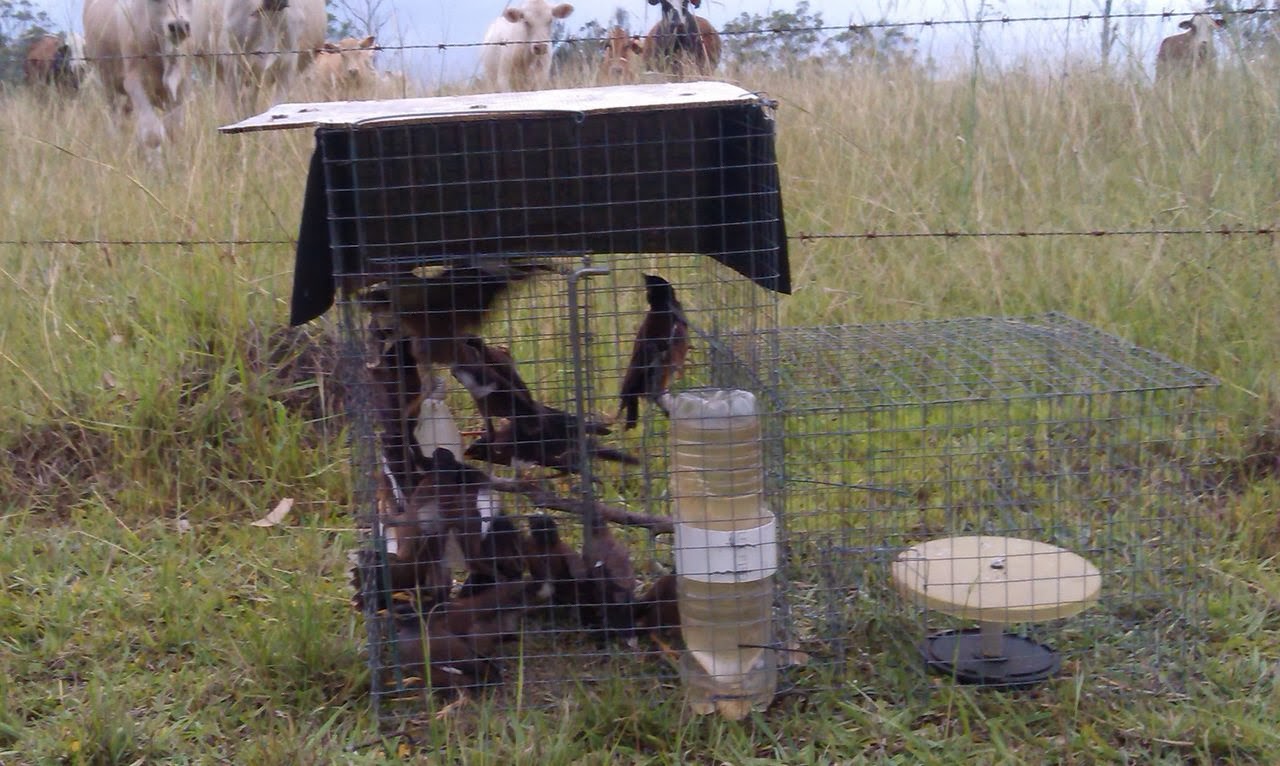 Posted by Indian Myna Project Officer at 1:06 AM

Early last century, the myna was introduced to Atiu Island in Cook Islands as a way of controlling insects and other pests in crops and gardens.
But within a few short years, its aggressive behaviour destroyed the local bird populations.
In 2000, the myna was declared to be among the world's 100 worst invasive species.
The people of Atiu have gone a step further, declaring a war on the myna - calling themselves the 'myanators'.

To see the rest of the story follow this link to the ABC website  http://www.abc.net.au/news/2014-01-06/an-cook-islands-aims-to-be-first-in-the-world-to-eliminate-myna/5185870
Posted by Indian Myna Project Officer at 1:27 AM

5000 MYNAS DOWN and STILL COUNTING

The CVCIA's Indian Myna group has now removed over 5000 of the pest birds from our pristine Clarence Valley environment, thereby allowing thousands more nest sites available for our wonderful natives.
Well done all trappers, keep up the great work.
Remember even if you only stop one pair from breeding over a couple of years they could have produced over one hundred offspring.
Posted by Indian Myna Project Officer at 2:07 PM 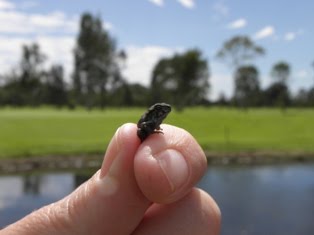 Look for blogs by topic: